A smart light and companion. Take the Meow Wolf experience home with you!

My Role: UX Researcher and Designer

This project was done in collaboration with Meow Wolf, MaCher, and SMC IxD. Meow Wolf is an arts and entertainment company that creates large-scale interactive and immersive installations. They were looking to create an exciting new product for their store that combines a physical product with a digital experience. Meow Wolf partnered with MaCher which is a product manufacturer and MaCher in turn partnered with SMC IxD to generate ideas for the new product.

The Meow Orb is a smart light that pairs with an app. From the app the user can select different "scenes" inspired by the Meow Wolf exhibit. The Meow Orb then lights up your room according to the selected scene. Users can immerse themselves further in the experience by casting Meow Wolf videos to their TV and listening to narrative stories of the Meow Wolf world. This creates an extension of the exhibit that get to take home with them to further engage with the brand.

Our team conducted extensive research on Meow Wolf to better understand the company. We looked into their existing products, their online presence, and what their customers were saying about them. 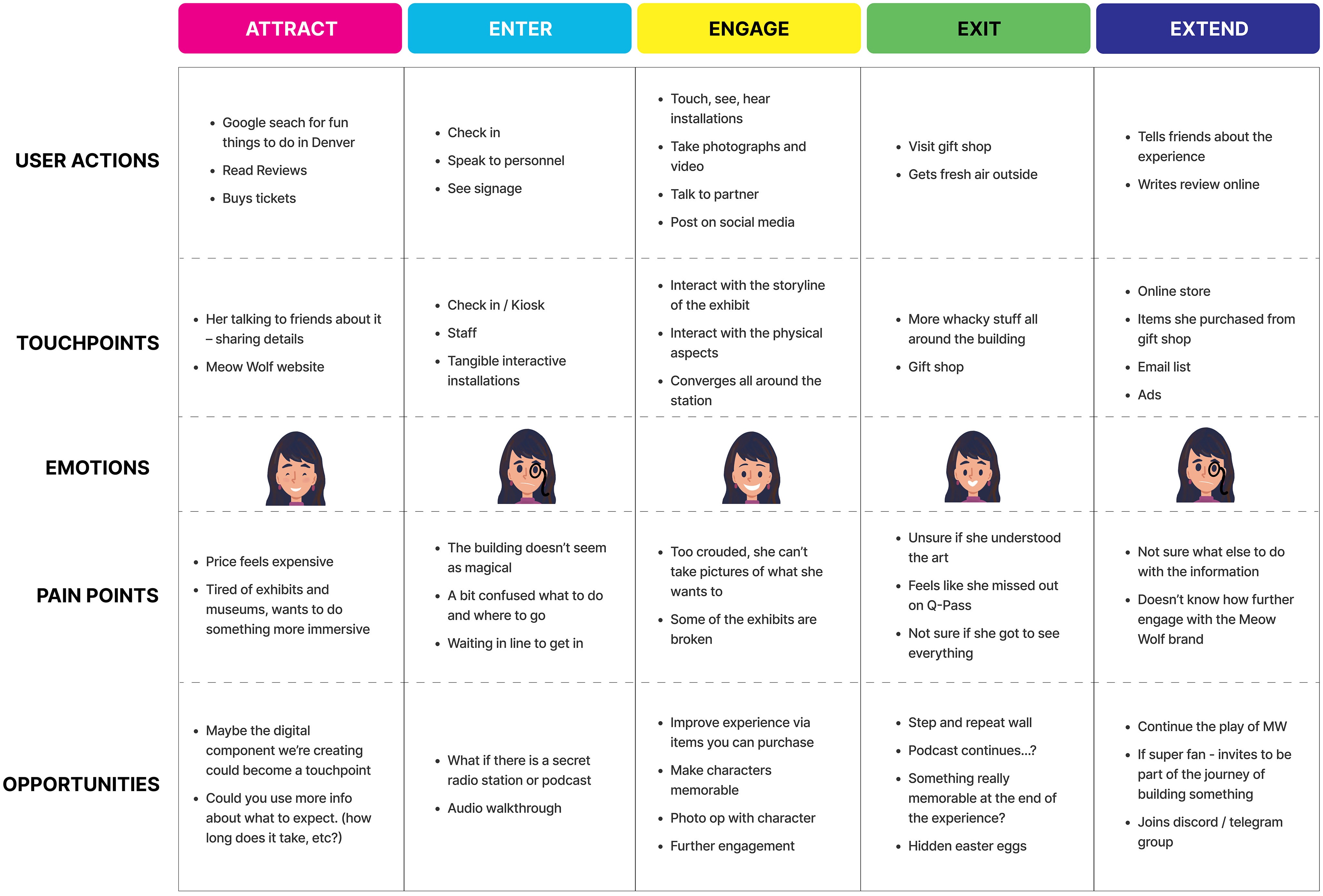 The design team created a user journey map to better understand Meow Wolf visitors. The journey map included User Actions, Touchpoints, Emotions, Pain Points, and Opportunities. The journey map was based on secondary research. We discovered an opportunity to focus on the experience after visitors leave Meow Wolf.

Let’s create an immersive experience and encourage Meow Wolf fans to be part of the Convergence universe.

Our team created a variety of concepts. Below are the leading ones. 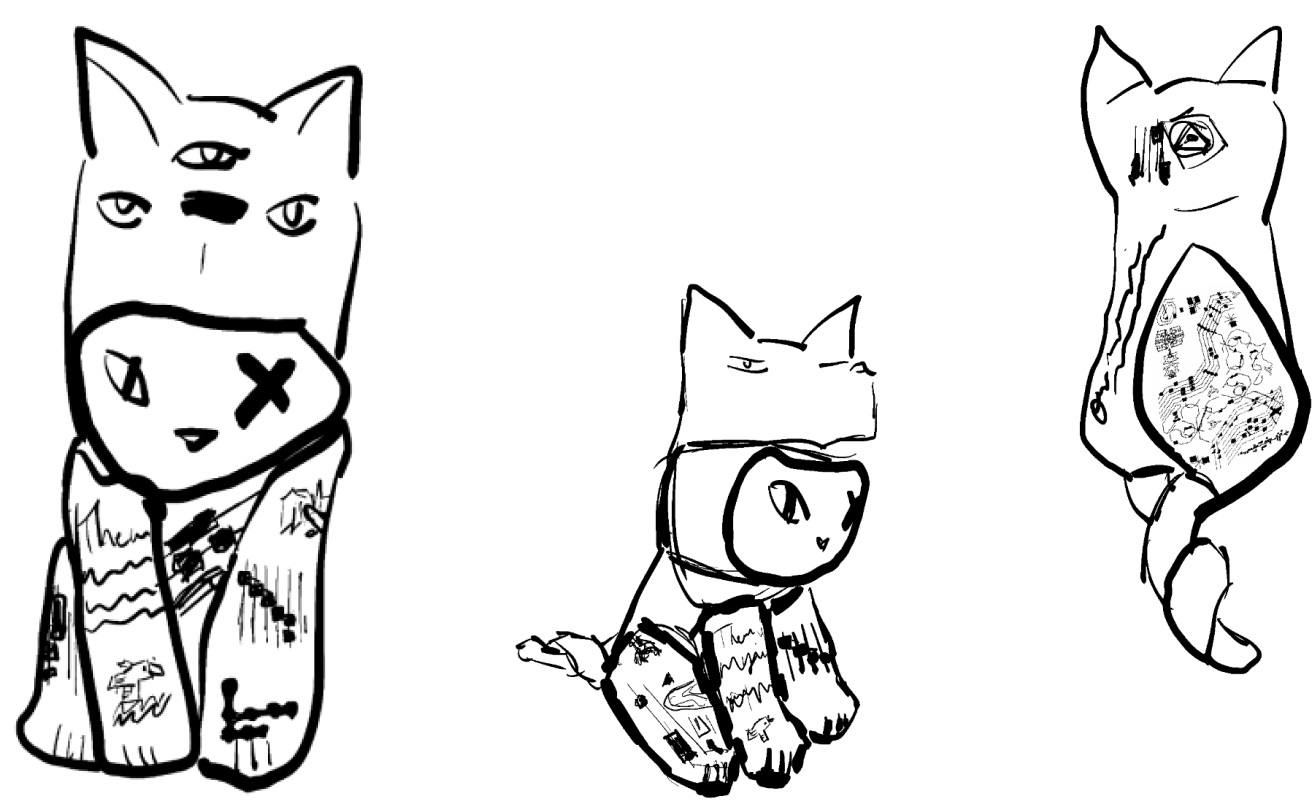 A Meow Wolf inspired character that also functioned as a puzzle. An app would provide AR functionality and games. 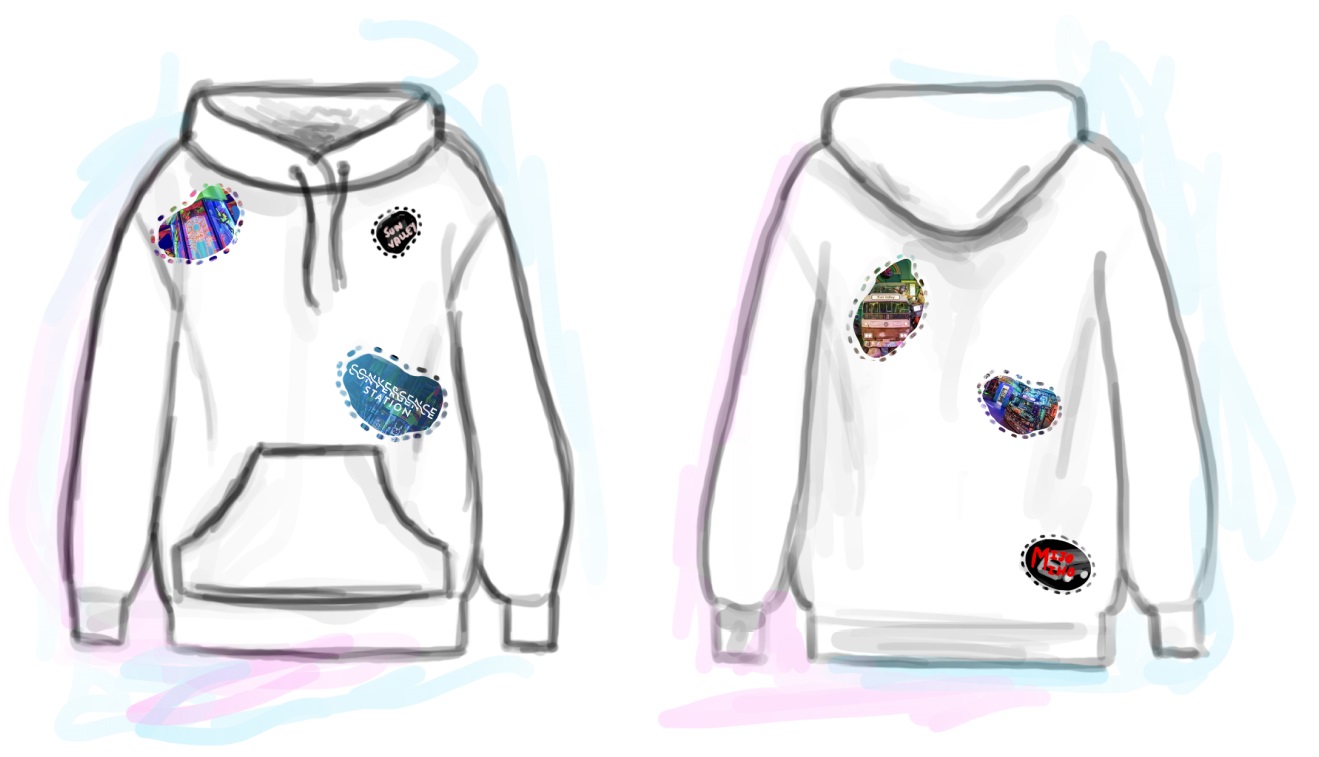 A hoodie that customers could customize with patches. Different patches would be available at different Meow Wolf locations. 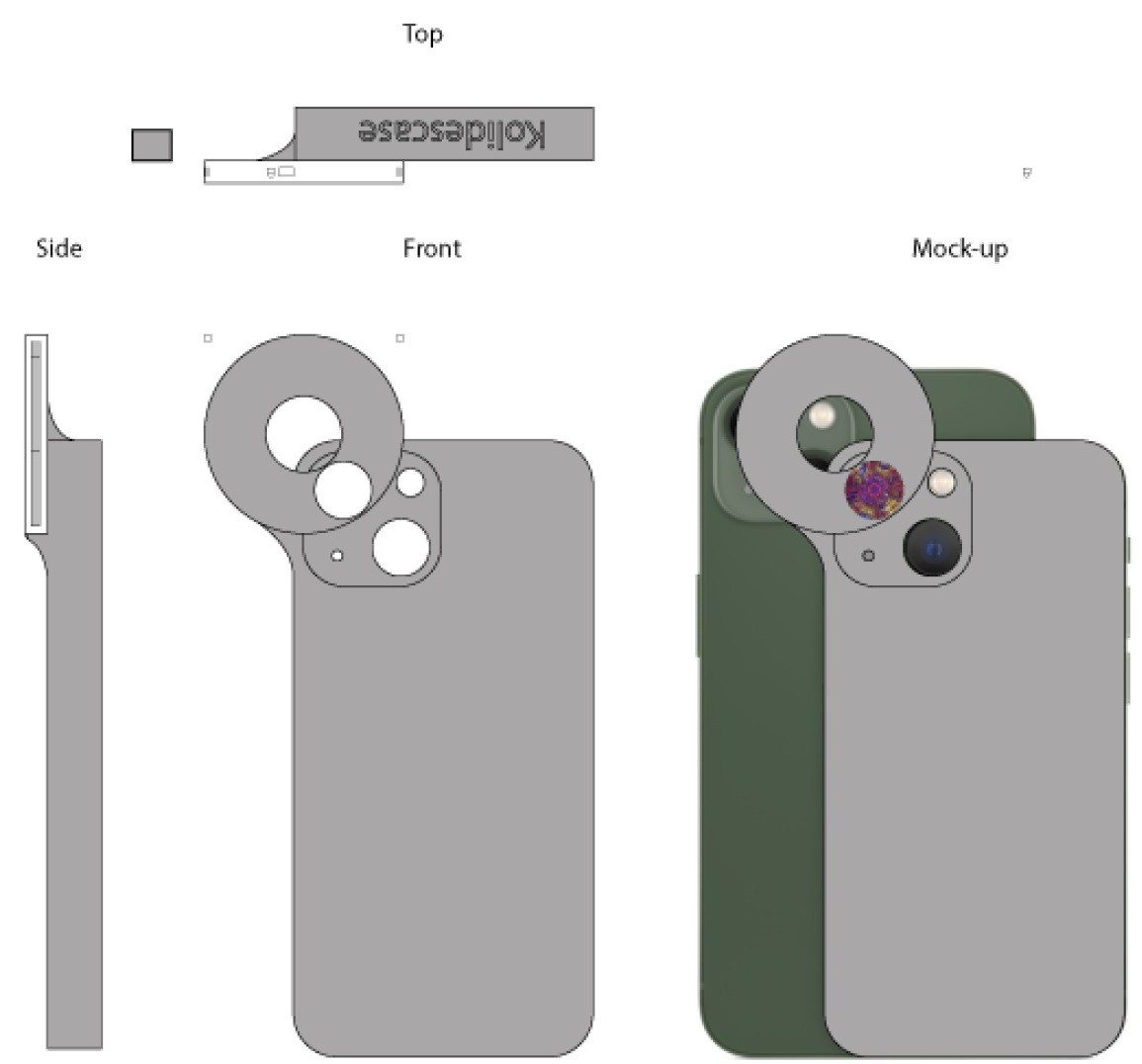 A smartphone attachment that has multiple lens filters. Perfect for taking pictures at Meow Wolf locations. 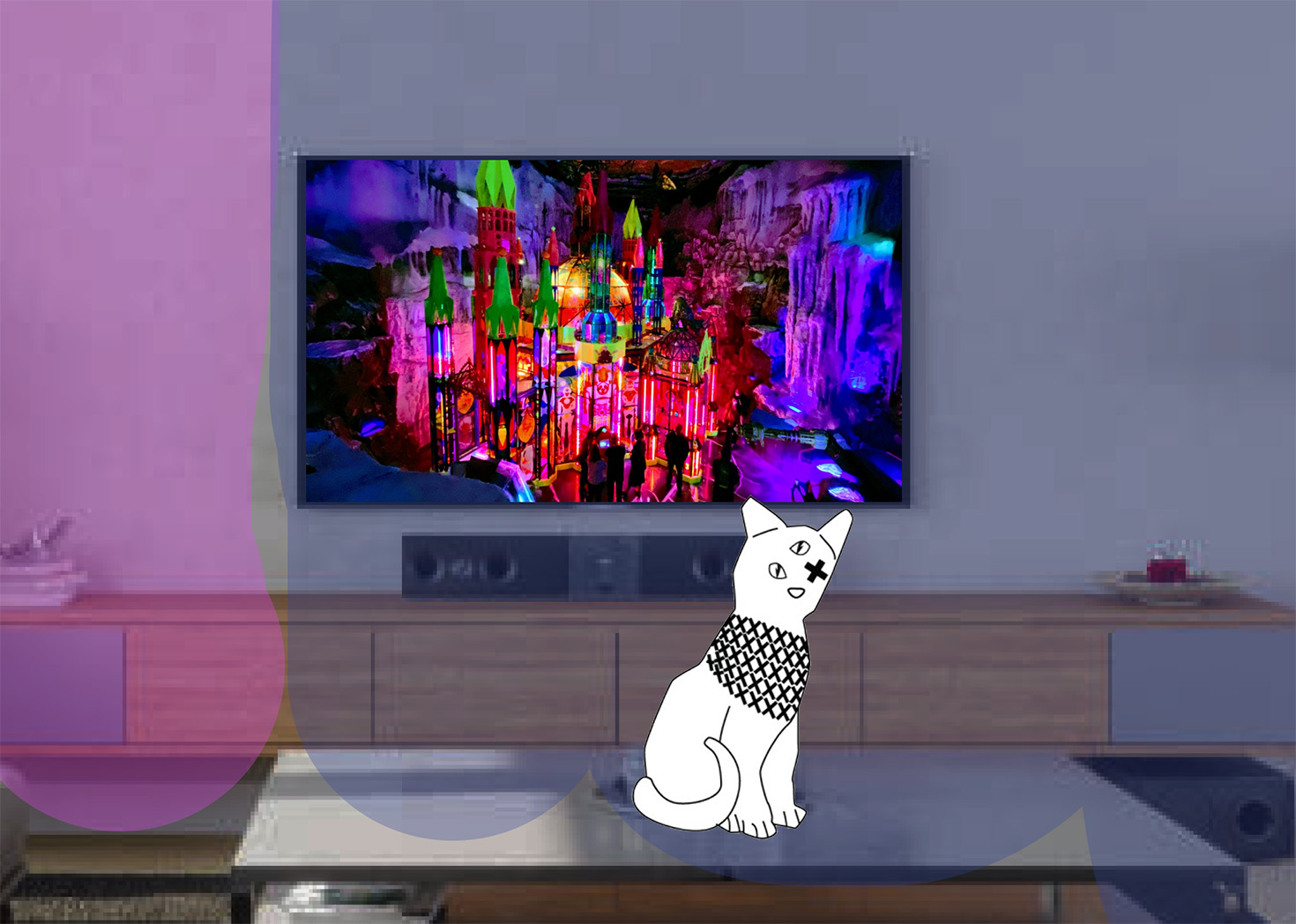 Some of the aspects that stood out to us most about Meow Wolf was their use of lights and fun characters at their exhibits. The concept that we decided to move forward with incorporated both those qualities. The Meow Orb is a smart light that pairs with an app. From the app the user can select different "scenes" inspired by the Meow Wolf exhibit. The Meow Orb then lights up your room according to the selected scene. Users can immerse themselves further in the experience by casting Meow Wolf videos to their TV. 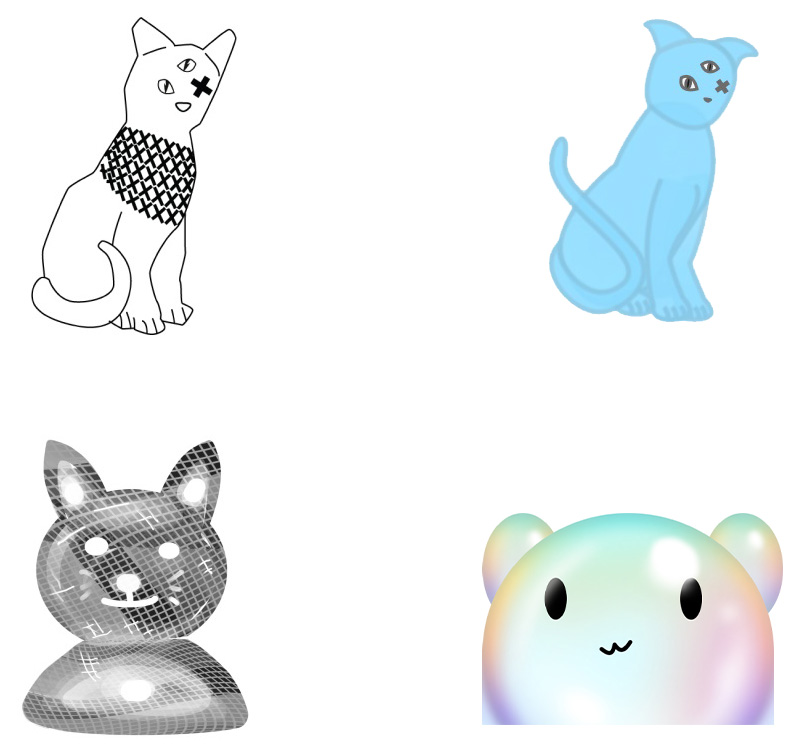 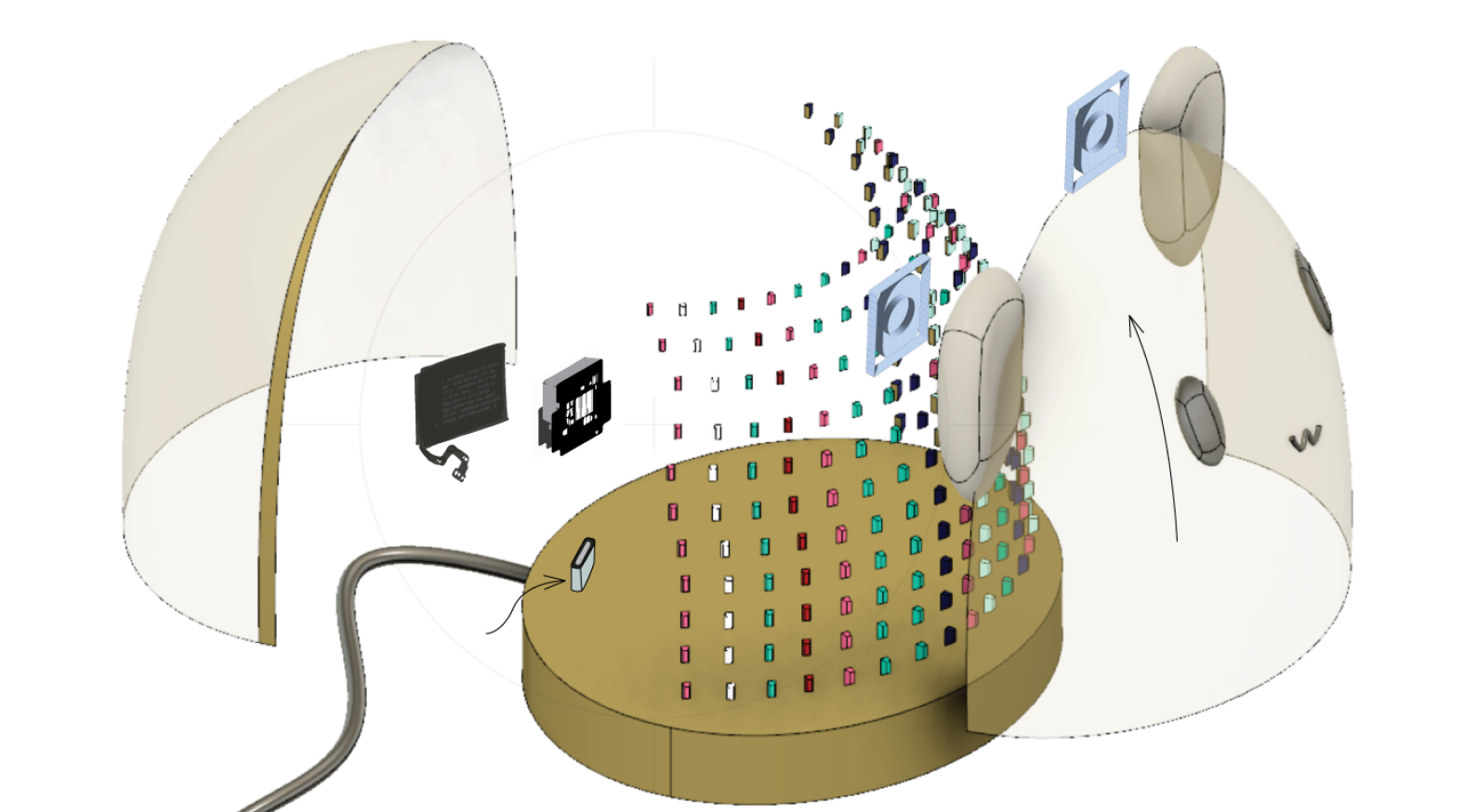 One of the requirements of this project was to develop a 3D model of the physical product. Above is an exploded view showing the internal components. 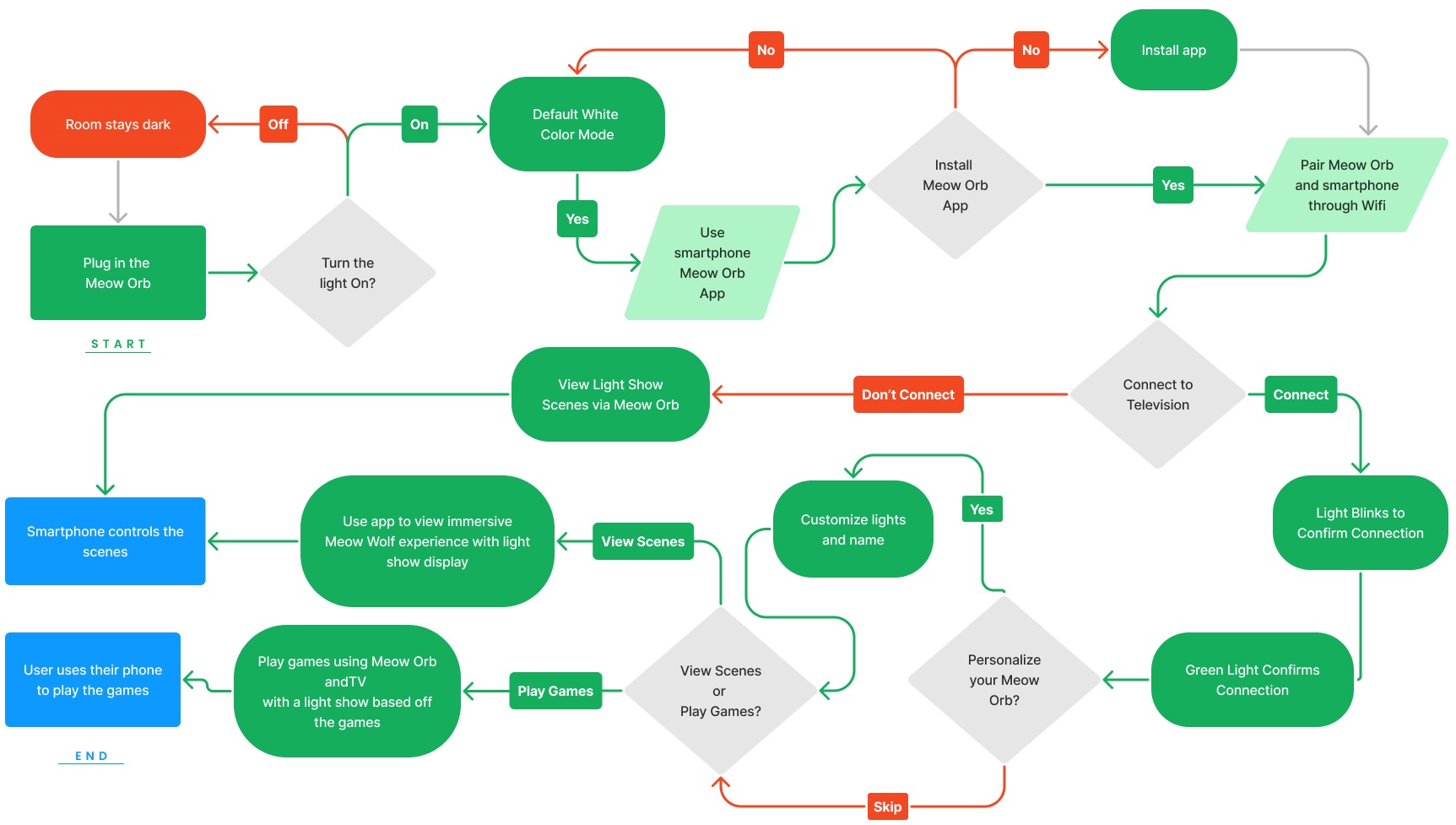 Before creating wireframes we first developed a user flow diagram that helped us to define the interaction between the user and the device/app. 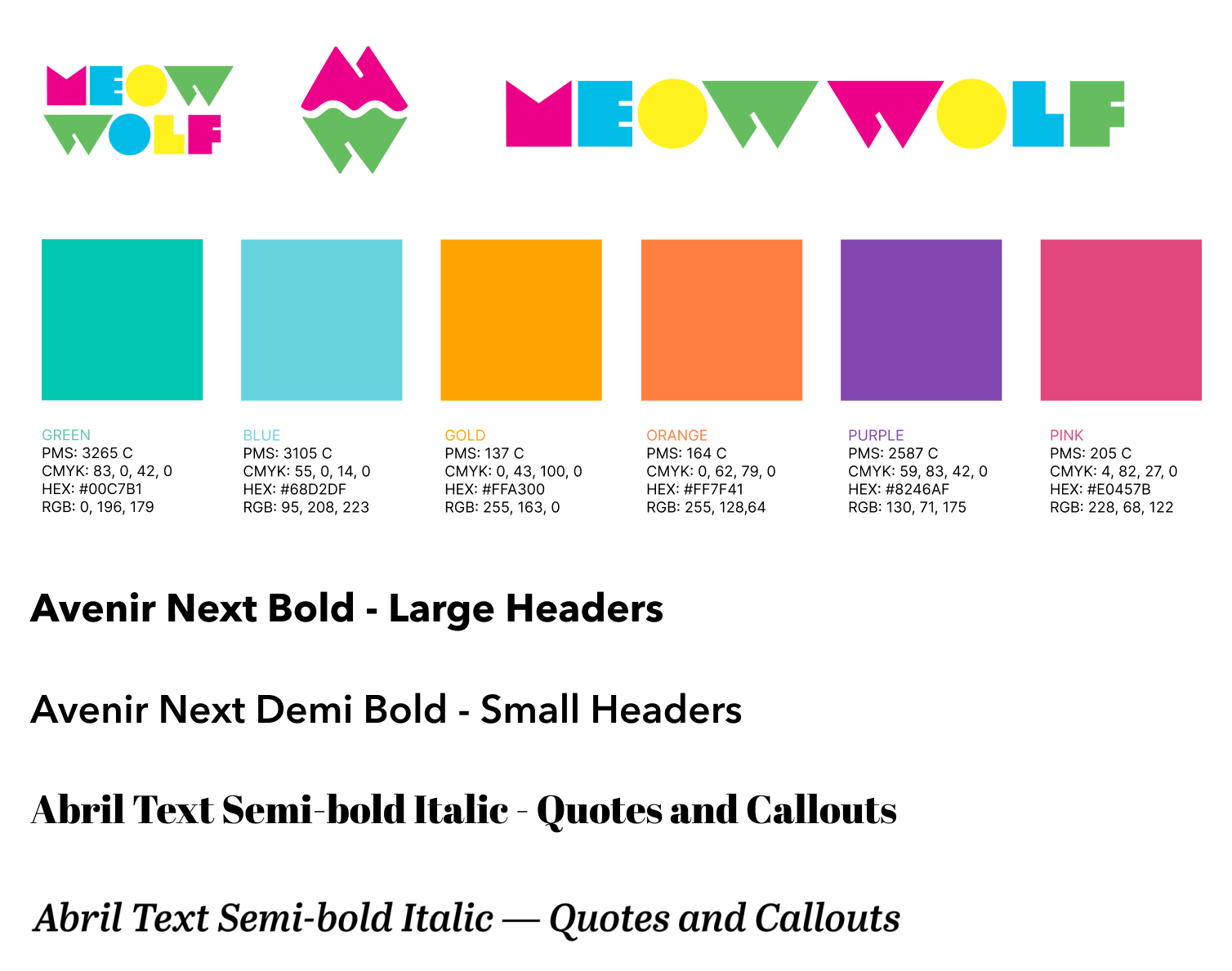 We created a mid fidelity prototype of the companion app in Figma using Meow Wolf's style guide. This was valuable to help us define the pairing process between the Meow Orb and app, the onboarding process, and product features.

The Meow Orb is designed to pair with Meow Wolf's app. Users connect their Meow Orb via Wi-Fi using a specific code.

In this portion of the app the user navigates through the home screen and selects the Scenes feature. Scenes are based off of worlds in the Meow Wolf universe. Once a scene is selected the Meow Orb would light up colors inspired from the selected world.

Using the mid fidelity prototype, our team conducted a usability test and discovered and identified was some key issues:

User may not understand what we mean by "scenes"

We added an onboarding screen that describes what this feature does.

User may not understand what we mean by "narration"

In the new version we added a guide to the app which helps to explain this feature.

It wasn’t clear whether a TV was required

In the UI we reduced the emphasis on the Airplay button but reducing its size and changing its location.

General confusion about what the app was used for

We added a few onboarding screens so users know the purpose of the app.

Users felt that customization was missing

This one felt like an obvious oversight for us. We had designed a smart light but left out the features users expected to see such as the ability to manually control the color and brightness. We added these features to the new version. We also added the ability to name your Meow Orb and the name would appear throughout the app.

The pairing process was redesigned to function the same way as most IoT devices. The user first connects to the Meow Orb's Wi-Fi network and then uses the app to connect the Meow Orb to their home Wi-Fi network.

This portion of the app was added to tell the user exactly what the Meow Orb does. We added the ability to "Purrsonalize" the Meow Orb with a custom name. The Meow Orb then serves as a guide throughout the app to help the user as needed.

The Meow Orb guide in the bottom right corner helps the user navigate the app. We also added the ability to set the Meow Orb to a specific color or color mode.

This project was a challenge and felt overwhelming at times. My team chose to create a product that included many different components. Overall the project was a success because we managed to create an appealing product that fit within Meow Wolf's specific style. One area to improve would be to have prototyped the physical product and to have conducted usability testing with it.